July 2021
END OF TERM
The final dub of the horror film END OF TERM at POINT 1 AUDIO POST Borehamwood. Directed and written by John Paul Chapel. Music and sound design — Jeff Crampton and Malcolm Ironton. Recorded at Crowborough Studios Sussex.
11th July 2020
Billy Jay - Glad I Never Ended Up With You!
To be released mid July: On the barren western reaches of the Dartmoor Prairies, holed up in a shotgun shack, lives BILLY JAY, a country singer with his soul deep in the Country Blues. He shares his shack in the company of a faithful dog and a mean old desperate Duck, with only a few creature comforts, a well worn J200 and an old battered 4 track reel to reel tape recorder. It was on this recorder BILLY JAY penned the dystopian antidote to all love songs. “Glad I Never Ended Up With You”.

Banished from the Ballincollig Backwoods in Cork County, this lost Celtic Cowboy is destined to drift the plains of the South Devon badlands and to ride the Blues Train into the rail tracks of his soul. Billy's keeping one step ahead of the Hell Hounds on his trail, blowing on the Devils Harp and riding on that last Hell-bound express.
11th July 2020
Cool Dining Vols 1&2
JUST RELEASED: Two exciting digital download albums. COOL DINING Vols 1&2, featuring music from Rick Stein's BBC Travels - to create the perfect mood.

For over twenty years Crocodile Music has worked closely with Denham Productions in creating and composing original music for the Rick Stein series of programmes for BBC Television.

Throughout the many series of programmes viewers have followed the intrepid Chef as he sets off time and again to seek out the worlds culinary delights while also exploring the history of the the culture behind the food he discovered. From the series music catalogue Crocodile Music have compiled two unique albums 'COOL DINING' Vols 1&2 now avaiable as Digital Downloads. The music tracks feature a menu of specially selected music from Rick's various series- to create the perfect mood. 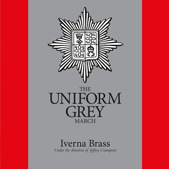 This unique recording is the instrumental version of the marching song of the 13th (Kensington) Battalion London Regiment, Princess Louise's Kensington Regiment. Composed in 1911 The Uniform Grey was inspired by the colour of the various London Regiment's uniforms of the time. The main colour was predominantly grey and those Regiments became known as 'The Grey Brigade'.

Sleeve Artwork Information: Red & Grey are the Regimental Colours. The Regimental Badge is shown against the grey background. In the center is the crest of the Royal Borough of Kensington and Chelsea. Reverse: The photo of the band was taken from a postcard circa 1916. The photo shows the band of the 60th London Division. On the left the bass drum has the Bumble Bee symbol of the 60th London Division stencilled on it. Members of the band come from 13th London (Kensingtons), 16th London (Queens Westminster Rifles) together with others from the Royal Engineers and Army Service Corps. Location and date of the photo is unknown. It is safe to assume that it was taken in France as on the reverse it is printed 'Carte Postale'. The photo was probably taken just before or after a concert by the band. 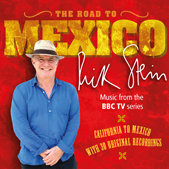 New Rick Stein TV soundtrack
The Road to Mexico
Crocodile Records has just released the latest CD in the Rick Stein television series collection.
In this series for BBC TV, Rick embarks on a nostalgic journey from San Francisco to Oaxaca in Mexico retracing a trip he made in the late 1960`s. 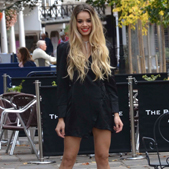 Filming has been completed for the new video of "Here Comes That Girl Again" the next single release by Lloyd Dereks.

This video can be viewed in our 'Music Videos' section. 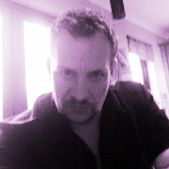 KDX
Dance, Trance, Hard House, and House Music
KDX is Dean Stapple: dance, trance, hard house, and House music. Dean has been putting out this genre for years and now has a place to park his tunes. His clarity and precision programming techniques are the envy of DJ’s across the EU and UK. His work is featured in The Cherokee Film “The Burger Van at the End Of The Gig”. And producers have included his loops on many singles, jingles and backing tracks. At present Dean is working on tracks exclusively for the Crocodile Production Music Catalogue. 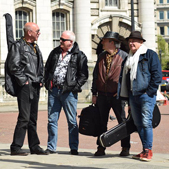 Slide guitarist and song writer Pete Tindal has been playing country Blues since the early sixties. A member of the very successful Australian band The Cherokeeshe has gigged the UK, EU, Scandinavia , EU, USA, and of course AUS. Pete and the Cherokees are just completing their first 120 minute feature film “The Burger Van at the End of the Gig”. This is a concept of selling music which was employed in the sixties and now the band has turned time on its head. The film, which is about the band The Cherokees, who do a deal, by accident, with the devil for a hamburger each? They get their burgers and find, that to get out of hell they have to get a gold record. They get help from an Elvis for being this backing band and for helping him to get out of hell.

This is 120 minutes of rockinrolliking fun times by a band of old geezers. A bit like Last of the summer wine meets Spinal tap with the Monkees tossed into a mad salad. The music and film will be available from this website on the 30th of August. The band The Cherokees who are featured in the film are currently rehearsing to go out on the road to promote their film